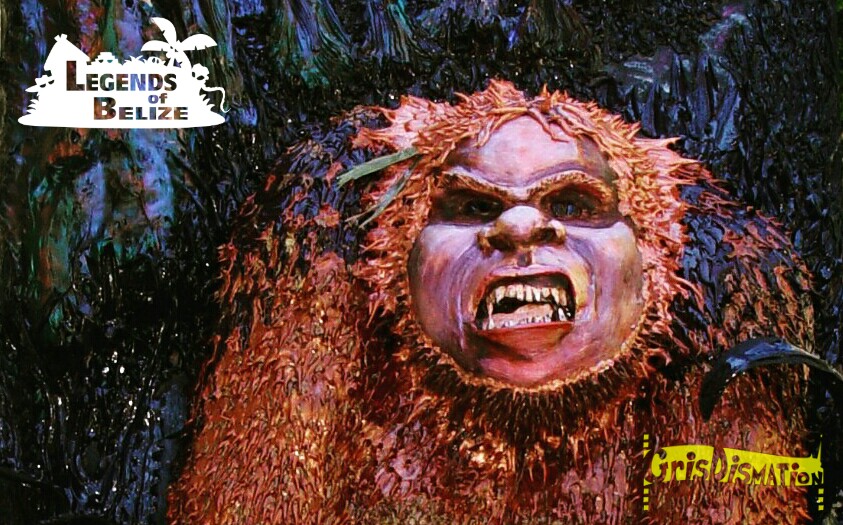 Legends of Belize, Sisimita, is a scary female similar to bigfoot believed to roam the jungles of Belize.

There are monsters of fairy tales and scary stories but in Belize, Central America, there are terrifying legends about strange creatures that roam the jungles and waters.

When growing up in Belize Dismas and GrissyG, remember the warnings told by their grandparents and elders about horrifying creatures. Some supernatural, some cryptozoological, and some just plain out bizarre and strange. These mysterious but fascinating stories about the legendary creatures inspired the series, Legends of Belize.

Legends of Belize is a series of 14 paintings, 15 graphic art logos, 14 descriptions, 2 books, and in production; animated films and more. The series capture and document the Belizean mythological creatures that have taught, scared, and intrigued people for many generations.

Born in Corozal Town, Belize, Central America, Dismas and GrissyG, husband and wife, established GrisDismation in 2003 as a signature to represent their collaborative work to produce Art, animation and books. Throughout the years Dismas and GrissyG have authored two books, produced over twenty short animations, including an award winning animation.Their work have aired on TV and in film festivals in the US and abroad.

To develop Legends of Belize art and book series, information was compiled from childhood memories of tales, books, internet research, and interviews with family, and fellow Belizeans. Sketchbooks were filled with concept drawings to develop the mythic creatures with visual clues and iconography of Belizean culture. Art logos also incorporate each mythic creature and the series in graphic text form.

Dismas and GrissyG collaborated both conceptually and physically to sculpt and paint the creatures of Belizean folklore in the artists own unique styles and mediums to bring the myths into this century like never before.

They have presented at Universities and schools in California and in Belize, have been featured in the news, newspapers, on the radio and TV. With over ten years researching, documenting, and developing the Legends of Belize series, Dismas and GrissyG have become experts in the field of Belizean mythology and folklore. In 2015, Dismas and GrissyG appeared as guests in a documentary that aired worldwide titled, “Boogeymen, Tata Duende,” about the Belizean mythical jungle gnome.

To document and expand on the Legends of Belize Art series and books, the artists, with their 11 year old daughter, who has won several animation awards on her own and a best actress award at age 5, continue to produce more animated movies and books about Belizean culture, mythology, and folklore, along with other Art and animated projects.

Since the release of the Legends of Belize Art and book series in (2003), Dismas, GrissyG and their daughter Nefertina share Belizean mythology, folklore, and culture, to document and preserve their Belizean traditions. 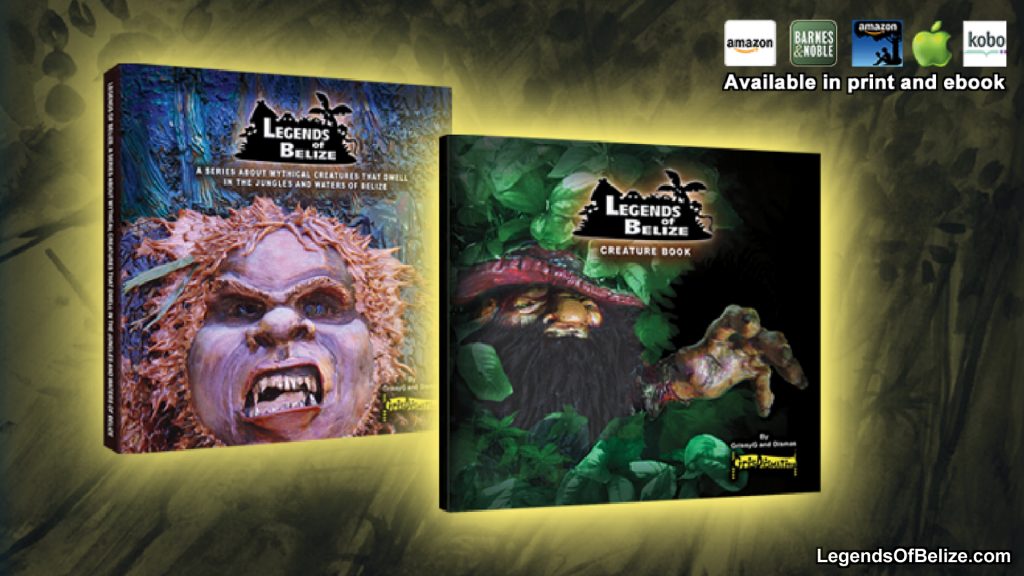 Legends of Belize a series about mythical creatures that dwell in the jungles and waters of Belize.

The Belizean legends are captured, documented, and preserved like never before in a comprehensive art series and books with fully colored and detailed images of fine art by artists, authors, and award winning animators, Dismas and GrissyG.

Discover the supernatural creatures that await deep in the jungles, such as the mysterious dwarf called Tata Duende with backwards feet and is believed to rip the thumbs off of tresspassers, or the beautiful woman known to locals as the Xtabai, a shapeshifting siren who seduces drunks to never be seen again. These creatures and many more can be found in the Legends of Belize Books.

Learn about the Cryptozoological, Paranormal, and Unexplained creatures that haunt Belize.

Be fascinated, be terrified, Belize.

*Artistic
Every page is fully designed and colored with 14 Fine art depictions of the Belizean mythological creatures by artists, authors, and award winning animators, Dismas and GrissyG.

Legends of Belize books are available in print and e-book. Buy your copy from your favorite online book store such as:

“I liked how you said one purpose for the existence of these characters is to make young and old more careful how they live their lives and help them avoid trouble and horrors befalling them...Good work.”
Tom Tenowich
Writer/Producer of TV series “Saved By The Bell” and “Mork and Mindy”
“...This latest presentation of Belize legends, myths, and stories just proves how firmly they have remained in our universal psyche. What GrissyG and Dismas have done is to use the backgrounds to pinpoint the specific locations in Belize and that is so unique. This is a wonderful addition to our very limited collection of Belize-oriented literature.”
Araceli “Lita” Hunter Krohn,
Belizean Educator and Historian.

WHO IS TATA DUENDE?

Tata Duende short film/trailer is the first Belizean animated folklore character made in 2013. The animated short is produced in a 2D traditional hand drawn frame by frame technique, incorporating traditional watercolors for the backgrounds. Utilizing the traditional art mediums and techniques, Dismas and GrissyG, create an artistic visual film to capture and share the Belizean mythology like never before.

The Tata Duende animated short is made by Belizean Authors, Artists and Award-winning Animators, Dismas and GrissyG, as an addition to the Legends of Belize series to document and share Belizean Mythology and folklore. The short film premiered and screened at the Hollywood Shorts Film Festival in Hollywood California in October 2013.The short film has aired on the Belize Watch TV Show in Belize, Central America in December 2014. It was also presented to the students of Faith Nazarene Primary School, San Ignacio, Cayo, Belize as part of the Boogeymen Tata Duende documentary that aired on the Travel and Escape channel in 2015 worldwide.

Discover Tata Duende, a legendary jungle gnome and other ancient Central American mythology from Belize with an entertaining and educational slide show and presentation titled, “Legends of Belize.” Learn about Belizean landmarks, iconography, and the importance of mythology in culture.

The Legends of Belize slide show and presentation is a fascinating and educational topic for your audience. We also provide presentations at keynote speaking events, paranormal conventions, museums, galleries and more.

GrisDismaion designs are available on T-Shirts/Mugs/and more at these online stores:

Legends of Belize T-shirts in all sizes and colors at Spreadshirt:
http://grisdismation.spreadshirt.com/

Legends of Belize Mugs and home Decorations at Zazzle:

Be a part of the tradition and share Belizean mythology or be the one who gives the most memorable gifts!

Buy an officially designed Legends of Belize product with creatures based on Belizean folklore by artists, authors, and award winning animators, Dismas and GrissyG/ GrisDismation. 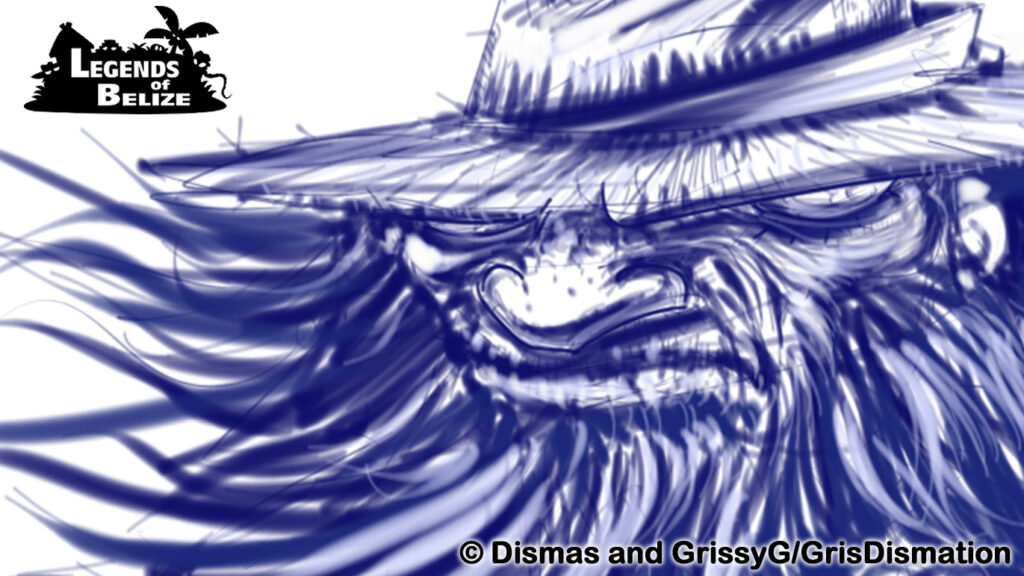 Since 2003, and years in production, GrisDismation’s Legends Of Belize, Tata Duende, the animated film is in full development. Stay tooned and keep checking back here for updates and behind the scenes happenings.

For centuries folklore and legends have been an important part of culture and are passed down from the elders for many generations. These stories continue to fascinate, scare and teach many to this day.

Dismas and GrissyG, artists, award winning animators, and authors, intrigued by the stories of their culture, document and share the ancient stories in short animation. It is an ambitious project animated and produced by only three passionate and determined artists, Dismas, GrissyG, and Nefertina.

If you enjoy mythology, ghosts, cryptids and scary stories about the unkown, these Belizean myths and folklore are sure to be fascinating!

GrisDismation was established in 2003, as a collaborative signature between GrissyG and Dismas to produce out of the ordinary art, books, and films that fascinate, inspire, and entertain.

Authors of two books about Belizean folklore, the artists and authors have presented at Universities and schools since 2004 in California and Belize.

The Legends of Belize series have captured the interest of many in addition to the Daily News in Los Angeles, California, Channel 5, and Love TV/FM News in Belize, and was also featured in a documentary airing worldwide.

Dismas and GrissyG have worked with award winning directors and have produced over twenty short animations including an award winning animation.The artists work has also aired on TV and in film festivals in the US and abroad. With their 11 year old daughter who has won several animation awards on her own and a best actress award at age 5, together they have formed a formidable art team to produce fine works of art, animation, books and more.

GrisDismation makes original animation, from concept to completion, specializing in hand drawn frame by frame 2D Digital animation.
Need an animation for your next project? From indie films to commercials, music videos, and more, contact us to make it happen!